When I was about 16, I was single on Valentine's Day. I had just broken up with a guy, or more accurately, he had been seeing someone else for most of our "relationship" and I found out about it. I was upset and hurt that a lot of people I had considered to be my friends had known about the other girl and didn't tell me. So, Valentine's Day comes along and everyone was going out but I declined to join them because the ex and his new girl would be at the same party.
I was set to spend the night home alone, locked i
n my room listening to the same song on repeat and writing shitty, angsty teen poetry but my best friend Ewic had other plans for me. I was home alone, so I almost didn't even answer the door because I figured it was a neighbor looking for my parents. But, when I did, I saw Ewic holding a single red rose, a pack of Marlboro Reds, and a 6-pack of Budweiser. He said something corny like, "All my favorite Red's favorite reds."
He skipped the party to hang out with me.
I've been thinking about Ewic a lot recently. I've been going through some stuff and I really wish I could call him, he was always my first phone call when I was upset. I miss him terribly, but I'm thankful for memories like this that remind me what an awesome friend I had. 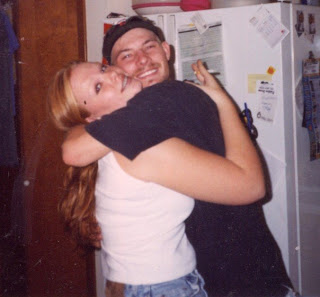 Far too many people missing others on Valentines day. Starting to think this day makes people feel bad more than better.

The same happened to me this V Day, I'm single.

I'm with Erasmus. It's cool if you're with someone, but most people seem to be dragged down by V-Day.

Damn, you still smoke cowboy killers? My kind of woman.

I've spent every single VDay of my life alone. Not a forever alone tho, I just dont see myself having a relationship before 25.

being alone at valentines day suck!

its nice you have great memories like that, and pics to remember them by :)

nostailga is good but new memories can be even better :)

I thought corny stuff like that only happened in movies:)

I say we get together a petition to get rid of Hallmark--I mean Valentines Day.

That's what I call a valentines story.

i don't care for this holiday.

aww that is beautiful.

but i really don't care for this holiday

I was alone for valentines :(

:] Awwww, that's nice. Thanks for the idea for future V. Days

I'ts really important to have a really close friend like this. My best friend, charlotte, lives 1200km away but whenever either of us needs to talk its only a phone call away. It's good knowing that no matter what happens that person is there for you.