In keeping with my recent theme of ripping off everything Rhondy posts on her blog, I'm doing my own 'What I like about you' blog. In an attempt to be diplomatic, I'm just going to use the top few friends on that archaic social networking site called myspace. Apparently, it still exists! I'm also going to rip off Rhondy's foundation of a short intro and then a favorite memory.

Rhondy is my favorite. She's my BFFFFFF... FFFFF. She only has two faults: that she lives too far away from me and that she doesn't have a damn cell phone so I can't call or text her whenever I want. I love that she agrees to drive from Austin to Katy so we can drive to El Campo to see a band she's never actually heard, only heard about from me. That's just the kind of person she is. Although we have shared some pretty crazy adventures, she's usually the voice of reason when my Hurricane Law instinct starts urging me to do something really ridiculous like stealing a school bus or the really crazy shit I wanted to do when I was younger and wilder that probably is best not to mention. She's always been there when I've needed her (which is often), I still can't express what it meant to me when she dropped everything to drive to GranFreakingBury, Texas to accompany me to my Ewic's funeral.

Favorite Memory:
This is really hard because we've been friends for so many years. So, instead of just picking one, I'm going to list a bunch of inside jokes that will only make sense to us. "Get on my wavelength!" (jump), "Dirt. It was in a bag.", "Duff is homeless", Memorial City Hospitals are following the Wal-Mart rule, "Look, it's Brooks and Dunn", Hikin' Rhondy and the Flying Sellout Tortilla Sisters.... this could go on forever so I'll stop there. Just know that we are funnier and smarter than you.

Travis is my favorite brother. He has three faults: he lives too far away from me, he doesn't call me as often as he should, and he doesn't read my blog. So, someone will have to tell him about all the nice things I write about him. Other than that he's pretty much perfect. If you're lucky enough to know him you know that he is the smartest, funniest, good lookin'-iest, most generous, and most caring person you will probably ever meet in your life.

Favorite Memory:
Also hard because I've known him his whole life. I'm just going to go with the whole Hurricane Ike weekend, even though he passed up a free chance to stay a few extra days. Bastard. Also, the first night I came into Denver for his Graduation Weekend and he, Weido, Jake (who I also love, even though he's not on the list) and I were all in the Bronco singing (screaming) along to Roger Creager. I don't care how sappy this sounds, there's just something about singing lyrics like "Runnin' with your buddies who don't give a damn" and "Things look good around here" with three of your favorite people in the world. Memories like these are probably why I love Roger Creager so damn much. His songs remind me of my brubber. 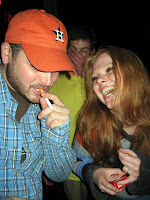 Mark is my 'other brother'. He does all the 'guy stuff' I need help with since my brother lives a thousand miles away, like help me move and mow my lawn. He's probably wishing I would get a boyfriend so he would get let off the hook. Also, when I was managing a restaurant and was ridiculously short staffed, he came in and bartended for me on like a two hour notice. He's also HILARIOUS.

Favorite Memory:
I try to keep this blog as clean as possible, so it's hard to think of a Weido story to share... I already mentioned Ike and TW's Grad weekend (where he taught my grandmother how to play Flip Cup and relentlessly harassed a waiter to bring him Cambodian Breast Milk) so... I think I'll go with the time we went to the Midnite Rodeo and he wore my mom's headset the whole night, not connected to anything... but convinced people his dad owned the place and he was getting very important communications. Then had a dance-off with my brother. I thought we were going to get our asses kicked by some rednecks. OH! Or the time he convinced the band at Einsteins to let him get on stage and sing Hootie and the Blowfish.

I've known Jacey since kindergarten. We're BBFs. I like to think that we played a pretty big part in each other's adolescence, especially the awkward Junior High years. Eek. Thankfully, we both survived and became the smart, funny, and all around awesome young ladies we are today. I know Rhondy already mentioned that Jacey is a ridiculous cook and host, but it should be repeated. When I was a nervous wreck counting the hours before my parent's surprise party, Jacey helped keep me in check.

Favorite Memory:
This might sound lame, but the day after RhoJo's party. We spent the whole day cooking, sipping (we were too hungover to go at it again full force), and talking. And looking at yearbooks. And picking on poor Dean, who didn't deserve any of it he was just outnumbered. I told you it might sound lame, but it wasn't. I promise.

Robin and I met because Rhondy was driving from Dallas to Katy during Allison and had Misty's phone, but failed to give me the number. (I love Rhondy, but when it comes to traveling and cell phones, she's retarded.) When the news showed me a firetruck floating on I45, I started to worry, so I stalked Misty's best friend Robin on the internet to IM her and ask her if she had Misty's number. She didn't. But, we've been IMing ever since. It's kind of sad, we even text each other to bug the other to get online... but, it's something I look forward to every day. And for the record, the picture I chose isn't an insult to Robin... I just know she doesn't like her face on the internet if it's not password protected. I have other pics I wanted to use, but thought I should ask her first.

Favorite Memory:
Geocaching was awesome. So was our trip to the zoo. And our bar hopping adventure to downtown Houston involving hottie in a tie, Robin jumping in the back of my truck while waiting for me to say goodbye to my new friend in the bar parking lot, Taco Cabana, and using a Port-a-Potty. 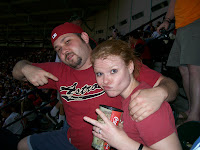 Andy and I also go way back to the Hutsell Hornet days of yore. He's nice, funny, and an amazing father to the most awesome two year old boy you've ever met. He's pretty good with the "Your Mom" jokes, but not as good as me. No one is, though. He's also pretty spontaneous, which is good if you want to try to keep up with me... it took little to no convincing for him to agree to stalk Roger Creager with me or to drive up to Denver to visit my favorite brother.

Favorite Memory:
Hmmmm... why are the memories so hard to narrow down? Last season's Astros home opener, chasing turkeys in Colorado and in Texas, BRAUMS!, treating a crowd of about five to every song about Texas we could find on karaoke night at a bar in Denver, staying up till the sun comes up drinking and laughing (on many occasions) 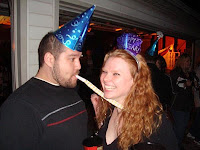 k
The myth, the man, the legend. All you need to know about John Mack is that he rocks your face. (That's what she said) John Mack plays it by beer, or flask, whatever the case may be. Together, we have perfected the "Hug and Pour Maneuver" which involves one of us pouring the contents of a flask into the other's drink while appearing to onlookers that we're just sharing a hug. He also has a strange fascination with sausage biscuits...


Ok, that's it. Hope you liked it. If you didn't make the list, I'm sorry. Be nicer to me and maybe you'll make the next one. Which will be whenever Rhondy makes a new one. I just copy everything she does. That's just how I roll.
at 10:35 PM

I like mine the best. But I'm a bit partial.

I might have to rip off Rhondy as well... I love your list. Thanks for being in my life and letting me be in yours.

I'm gonna rip off rhondy... but put it on facebook??
Great read Ceci.
re: Hmmmm... why are the memories so hard to narrow down?

Just wait til you have over 50 years of hard to narrow down memories... your brain starts to slough them off at random will! Sucks. Hey... that was a memory I wanted to hang on to!!!

I will do this, but refrain from "ranking" friends... unless they fall into a no compete category.. like my favorite son, My favorite daughter.... oh... I even have a favorite HUSBAND. Gotta love captain ass!

I love that pic of you and your favorite brother. I hate that you have that color hair apparently for real, while I have to pay for it. I think you should marry Weido already. Possibly, I should just shut up now. :D

Thanks, Tink! I think that's my favorite picture in the history of pictures.